Normally, blood flows from the heart to the arteries of the body. The arteries branch and get smaller until they become a capillary, which is just a single cell thick. In this way blood pressure drops to very low levels that the thinner walled veins can cope with. In an AVM, usually early in life, arteries connect directly to veins. This is a high-pressure shunt or fistula. Veins are not able to handle the pressure of the blood coming directly from the arteries. The veins stretch and enlarge and create what we call a ‘nidus’. Usually, there are multiple feeding vessels in an AVM and many draining veins.

How can an AVM be treated?

Endovascular techniques are now the main route of treatment for AVMs. This involves treating the AVM through the blood vessel system.

Through a pinhole incision, a catheter is placed into an artery in the groin area and passed to the AVM using x-ray guidance. Once in the correct vessel, an embolic material such as a coil or glue is placed into the abnormal communication cutting off the blood supply, in turn shrinking and shutting down the AVM. This procedure requires no stitches, downtown or major incision and can be done under moderate IV sedation. 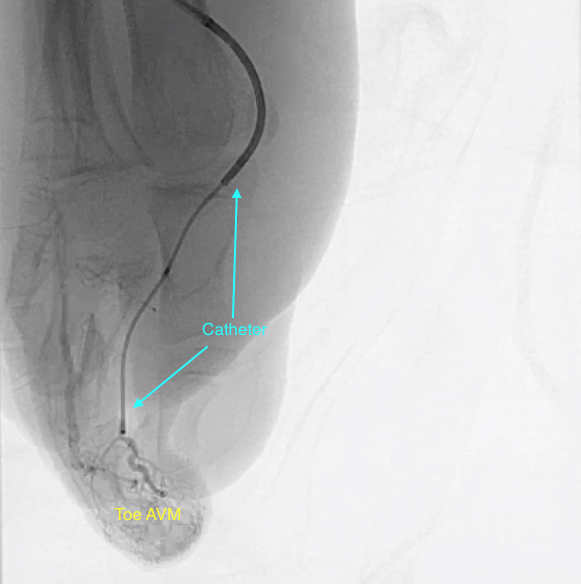 Usually, the diagnosis may be made on the based on the history and look at the area. If the doctor is not sure he can order an ultrasound or a CT scan.

If treatment is required, it is typically treated with sclerotherapy. It is something sprayed in the blood vessels by an Interventional Radiologist that provides a chemical reaction which makes the walls of the blood vessels there decrease. This makes the place invisible. Correction is also possible with surgery or laser treatment. A deviation that is in the legs can also be treated with support stockings.

What is a lymphatic malformation?

How can lymphatic malformations be treated?

There are two main options for treatment: sclerotherapy and surgical removal.

This is a procedure carried out by an interventional radiologist, who shrinks the lymphatic vessels by injecting a special substance through the skin under general anaesthetic. It may require several sclerotherapy sessions and even then, it might grow again.

Sometimes, lymphatic malformations can be removed safely. Detailed scans will be needed to plan the operation. There will be a certain amount of scarring after the operation, as with all surgery.