Critical leg ischemia is a lack of blood flow that endangers all or part of the leg and is usually defined as experiencing persistent and recurring pain while at rest, for more than two weeks, or ulceration or gangrene of the foot.

The pain of severe limb ischemia is felt in the toes and forefoot and is typically worse at night when cardiac output drops.  Patients wake up in the early hours with severe pain, relieved by hanging the leg out of the bed allowing blood to flow down to the foot.  Some patients take to sleeping in a chair.  Many patients get up and walk around in the night that stimulates flow and reduces pain.  During the day the patient may suffer short distance intermittent claudication.  This pattern of symptoms: calf claudication by day and rest pain in the toes at night is strongly suggestive of critical limb ischemia.

Without treatment, critical limb ischemia will progress, causing worsening pain and debility.  Ulcers develop on the lower leg and foot, and ultimately gangrene sets in.  If the problem is left too late it can become impossible to salvage the leg and amputation may become the only way to save the patient’s life.

Duplex scanning is the first method used to assess the affected limb and establish where the main blockages are that are limiting the blood flow. 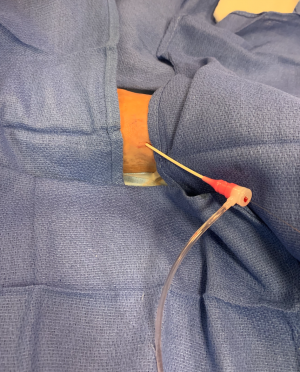 Some people will benefit from structured exercise classes to improve how far they can walk. Others may be recommended to have endovascular treatments to improve the circulation: 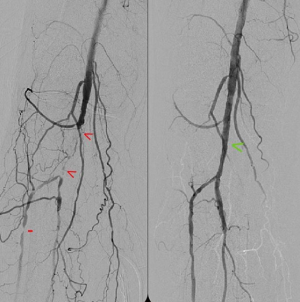 Atherectomy is a minimally-invasive method of removing plaque to re-open arteries. Unlike angioplasty and stenting which are designed to squish plaque to the side, atherectomy involves cutting and removing the plaque from the artery, restoring normal blood flow. 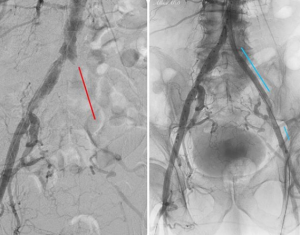 A stent is a small, metal scaffold that is placed inside an artery. Similar to balloon angioplasty, stents restore blood flow by pushing the plaque to the side but remain inside the artery forever. Stenting often follows balloon angioplasty as an additional treatment to help the vessel remain open.

Surgical bypass treats narrowed arteries by directly creating a detour, or bypass, around a section of the artery that is blocked. During a bypass procedure, a physician creates a new pathway for blood flow using a graft. A graft can be a portion of a vein or a synthetic tube that connects above and below a blockage to allow blood to flow around it.